Hubs and I are both sick with some kind of plague. We are pretty sure where we got it from, but no one is here to point fingers (Kev). Sore throats, phlegm, coughing. It’s pretty miserable. On the bright side, he’s been working from home so we’ve been able to spend a lot of time together.

Congee is a rice porridge that is pretty ubiquitous in Asian countries. In China, it’s frequently a breakfast food, served alongside fried dough sticks (youtiao) or with an array of toppings so you can choose your own adventure. Possibly you’ve seen it at dim sum restaurants making the rounds. It’s not that different from grits or cream of wheat or oatmeal, although congee classically skews savory rather than sweet.

Recipe below the cut. 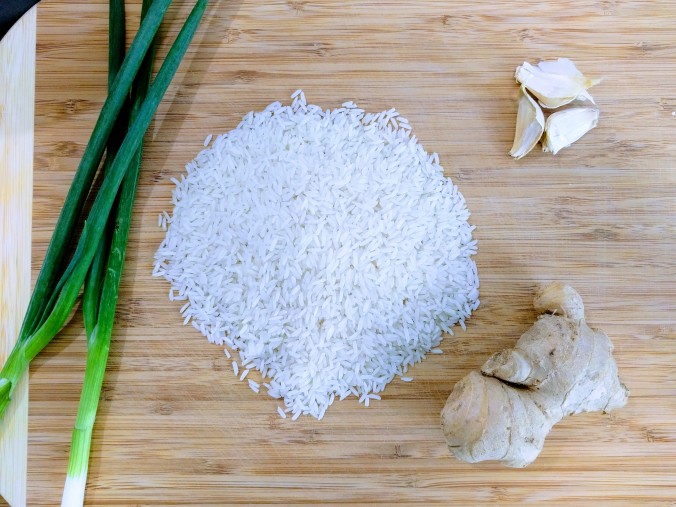 Though to be honest, I will also add a pinch of salt and a hunk of ginger at the beginning too. It’s so simple and endlessly customizable. Heck, even the 10 cups liquid is just personal preference to get a consistency that I like, but I’ll often add more if needed to get the right texture.

Rinse the rice. Put it and the liquid in a pot, bring to a boil, lower to a simmer.

Cook for about an hour, but the time in inexact. Keep looking at the texture. The rice will break down, everything turns creamy and silky and wonderful.

Stir intermittently (every 15 minutes or something like that) to keep rice from sticking to the bottom of your pot (stirring will also make it creamier because you’re further agitating and breaking down the grains of rice).

It’s done when it’s the texture of oatmeal slash whatever texture you like (example, at my mom’s house, it’s usually a much thinner porridge). Season to taste and serve.

(It’ll thicken more as it cools down. Feel free to thin with some liquid on reheating. I usually make a big batch and then store it in mason jars to keep the love going over the next few days.)

Now, you’re probably thinking, well that seems AWFULLY bland, doesn’t it? It doesn’t even have salt. And you’re correct. Although a bowl of plain congee is a simple pleasure in of itself. But the thing is, once you have the vaguest sense of the ratios, do literally whatever you want. Here are a few cooking variations I like to get you started.

topped with some ground beef, scallions, and fermented bean curd

And then even beyond that, here are some serving variations:

I mean, literally do whatever you want. Just eat it while it’s warm and steaming, and let it soothe your soul.

that tofu is chilling in the corner

Bonus: cold tofu side dish. I’m not sure if there is an official Chinese name for this (I just say ‘cold tofu’ but in Chinese), but the Japanese variant is hiyayakko).

Literally just chilled tofu with some toppings. Get a block of good quality soft/silken tofu (though some people like a little more chew, and if that’s you, go for medium or firm). If you can get fresh tofu, all the better, but that’s not accessible for most. Cut into blocks or slices or however you want to serve it. Drizzle some soy sauce and sesame oil over it. Top with whatever you want. I usually do scallions, grated ginger, some sesame seeds. If you want it a little sweet and tart, try a bit of rice vinegar and sugar. It’s also great with chili oil or chili bean paste. The Japanese versions I’ve had are often topped with katsuobushi (or bonito flakes).