A and I have very different backgrounds when it comes to nature and green growing things. He grew up surrounded by prairie and fruit trees and ponds (of both the fishing and swimming variety), whereas I have always lived in big cities. I have a highly romanticized view of what it means to garden. (In my view, bugs don’t try to bite me all the time.) When it came time to look for a house, we both wanted to have some outdoor space — he to remind himself of the green he had in childhood, and I to fulfill my lifelong dream of having a secret garden.

When A and I moved to St. Louis, we found an awesome Victorian house that had an actual yard, a rarity for most of these older homes. The house sits on a double lot, and all that extra space is gorgeous greenery, something we had been sorely missing when we lived in the metal-and-concrete-locked Dallas.

The original yard was landscaped with a lot of decorative plants.

Last year, we didn’t think about the garden until summer was already underway. That was a time of life changes and redirecting, and the garden was getting along decently with minimal intervention from us. We had managed to get an herb garden in the ground, though I made the mistake of choosing plants that were novel rather than ones I would actually use. We had a poorly placed lemongrass that tried to cut you when you attempted to get to the other herbs. We had pineapple mint but no minty mint. We had dill, even though I literally never use dill. Yet, even with that small amount of planting and those mistakes (likely because of the mistakes), we learned a lot. 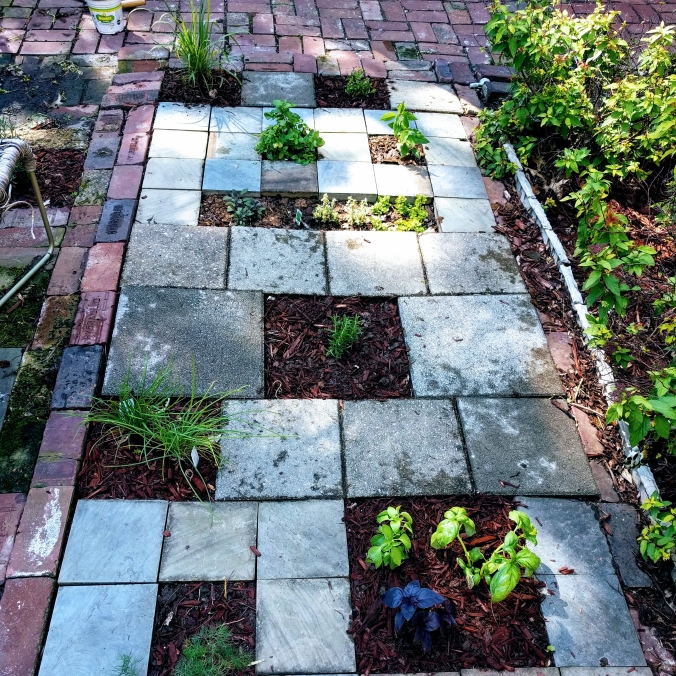 We took up some of the tiles and made a mosaic herb garden. The lemongrass is that one in the top left corner, and it got huge.